Both of them met at one of the monthly meetings at Kaikan. They immediately clicked. They both were working mothers of teenage kids. Nikita was new in the country and Lindsey gave her a very warm welcome at the Kaikan. Nikita felt as she found another family away from home, of Swiss SGI members. Nikita and Lindsey used to sit for hours after the weekly meeting at Lindsey’s place.

Nikita found a packet in her daughter’s bag, she was horrified as she took that packet out from the bag. It was cannabis. She could not believe that her 18-yr old daughter got addicted to it. Nikita’s world came upside down, She was finding a way to break this news to her husband Akhil. She read it somewhere that “do not get angry on the teenagers if you find they are going on a wrong path, try to be their friend.” She saw Aashima coming that high on drugs for the first time.

“Coffee!” Lindsey offered a mug to Nikita. She came out of her thoughts. “Something is bothering you, Nikita. You know you can tell me.” Lindsey said in an assuring voice. Loud footsteps interrupted their conversation. “Mom, I will be late in the evening. I am going out with friends.” 20-year old Josh said to his Mom Lindsey. Nikita saw colours of Lindsey’s face change as she was scared of her son’s outing. Lindsey understood Nikita’s expression and said, “I know he is a big boy now. But my worry has other reason. One year back he was addicted to drugs. He started at the age of 17, and by the time I came to knew about his addiction, he was in the dark pit of it. It was a hard time for all of us. I and John were helplessly witnessing the dreadful end of our talented child. We tried everything to help him, but he was not ready to accept it. We took him to rehabilitation but he ran away from there. He even told us that why we gave him birth. Those years were the darkest of our lives. He is addiction free from past one year but I still get scared for a moment when he says that he is going out with his friends.”

“What you did that he left addiction?” Nikita asked in very curious tone. “We decided to drop the idea of taking him to the rehabilitation centre, instead we got the centre at home. We discussed it with a team of doctors, psychologist and psychiatrist. They gave us the medicine and mode of giving medicine were through his favourite food. They told us that nothing should be forced upon him as he will get suspicious about the treatment. They told us to start trusting him again while keeping close eyes on his activities.”

“Besides this, we did something else. I discussed it with Nicolas, our group leader of that year. He asked me “What are the prayers you offer for your son while chanting?” I said, “I chant for his happiness and good health.” He said in a calm voice, ” From today onwards chant for him being connected with his Buddhahood. And chant for your happiness and peace of mind. I will visit him when the right time will come.” And he gave me a book to read. I started chanting as directed by him and noticed that Josh had started responding to the medicines. Last month, he asked me about the meaning of “Nam Myoho Renge Kyo” but he was not satisfied with my explanation. He asked me to call Nicolas.” Lindsey explained her journey to Nikita.

Nikita was hopeful that her daughter has a chance to lead a normal life but she was still hesitant in speaking about it to Lindsey. Nikita said in a hopeful voice, “I am happy for you Lindsey that Josh is doing fine now. Let’s meet up at my place next week for chanting. ” Lindsey smiled and said, “I will visit Aashima when the right time will come. Till then chant. Lindsey gave a packet to Nikita and asked her to open it when she reaches home. On reaching home, Nikita opened the packet and a very ancient book came out of it, “Nirvana Sutra – Teaching of Shakyamuni (Gautam Buddha)”. Nikita’s phone beeped and she saw WhatsApp messages from Lindsey which says, “New Contact, Dr Bernard.” “Wow, Can I read it, mom?” Nikita turned around on the excited voice of Aashima who was holding the book like a baby. 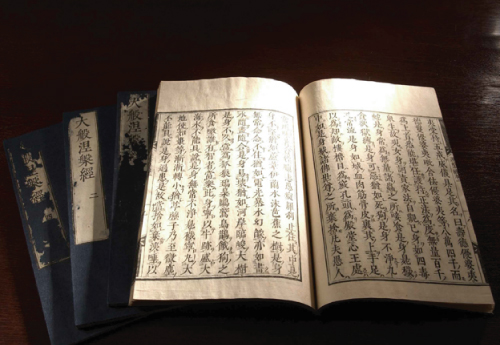